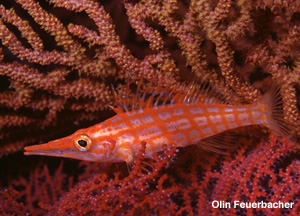 With San Carlos water temperatures reaching into the 80’s and the clear blue water of summer arriving, more people will be considering deep dives. While most of the marine life will be found on shallower dives, there are a few organisms that are more prevalent at deeper depths. One in particular is the spectacular longnose hawkfish, Oxycirrhites typus. 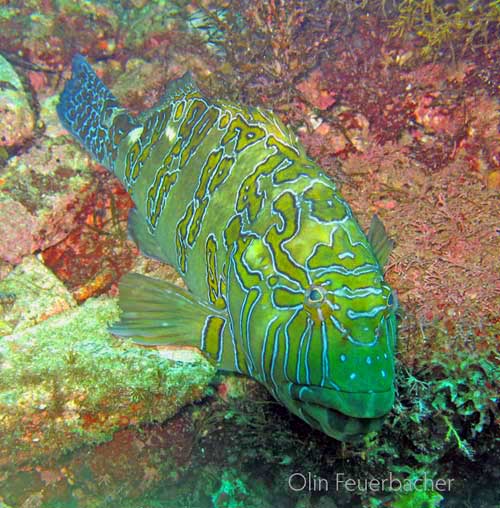 Familiar to most scuba divers in the Sea of Cortez are the Giant Hawkfish, Cirrhitus rivulatus, and the Coral hawkfish, Cirrhitichthys oxycephalus. The giant hawkfish is a large (to 20 inches, 520mm), green and brown mottled fish that is usually found in water that is shallower than 20 feet. 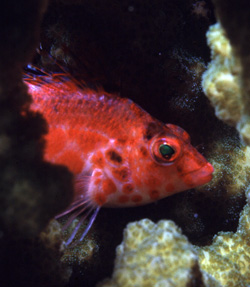 The coral hawkfish is a smaller hawkfish that is usually less than 3 inches, 76mm, in length and white with red or pink polka dots.

The Longnose Hawkfish, Oxycirrhites typus
Unlike it’s more common relatives, the longnose hawkfish is rarely observed, partly due to the depths at which it is found, and partly due to exceptional abilities of camouflage. But for a careful observer, the difficulty in spotting one is worth the effort. Underwater photographers travel around the world to get a shot of one, but we have these beautiful fish in our own backyard.

Coloration
With a striking red plaid coloration this fish has an immediate wow factor. What really sets it apart is the extended snout that it uses to pick small crustaceans off of the corals that it lives amongst. Found among the branches of black coral and gorgonians, the red coloration of longnose hawkfish fades at deep depths where reds are filtered and only blues remain. But bring a flashlight along and scuba divers will be able to see the brilliant colors of this fish in all their glory.

Hawkfish Habitat
Longnose hawkfish are rarely observed at depths shallower than 90 feet and become increasingly abundant as depths approach 150-175 feet. Even in these deeper depths they are not considered common. With persistence and bit of luck, they are spotted from time to time at Isla San Pedro Nolasco at depths ranging from 85-130+ feet. They are most often seen over small patch reefs that are surrounded by sand flats, or among the branches of the black coral colonies that are common at deeper depths. Both Northpoint and Southpoint have a smattering of these fish. Longnose hawkfish are even more plentiful along the Baja coast beginning at Isla Tortuga and south to La Paz and Cabo San Lucas.

Finding Longnose Hawkfish
To spot longnose hawkfish approach deep patch reefs and black coral colonies slowly. Move quickly, and the fish will startle and dive for cover, but if a scuba diver moves with care the fish will usually allow a close approach, relying on their camouflage for protection. Bring a flashlight to help you spot these beautiful little fish. The blue light at depth makes them blend into the background, but when illuminated by a flashlight, their reds will pop out of obscurity. Pay close attention to your gauges while hawkfish hunting. Both air and no-decompression time run out quickly at these depths.